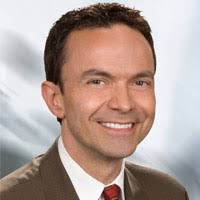 Throughout his twenty year career, meteorologist Paul Poteet has done one thing, consistently  – talk to people about the weather. He has been the voice of the weather on a number of local radio and television stations and in recent years he has shared his weather updates via social media.

Join us this week as we talk to Paul about how the different media platforms have changed over the years and where he thinks they will go in the future.

This is Paul Poteet’s 31st year of working as a media personality in the Indianapolis market.  He’s been a part of central Indiana mornings on tv and radio since 1993.

Three years ago he decided to become a 100% independent media content provider and produce all that content out of a home-based office, “Studio B.” (For “bedroom.”)  Since then he started calling himself “Indiana’s Weatherman,” and has added radio stations from South Bend to Evansville.  He’s also heard in Brownsburg, Marion, Anderson, Lafayette, and on the “Smiley Morning Show,” from his flagship radio station WZPL Indianapolis where he’s been on the morning show for over 15 years.

Every morning he gets up at 2am to develop forecasts, and generate audio, video, and text content for clients ranging from radio stations to websites including Indy Star Dot Com.  He’s the co-host of “Pet Pals TV,” a nationally syndicated magazine show with Patty Spitler that is seen locally on WNDY TV 23. He does weekend morning weather for WISH TV. He’s been a feature contributor to WTHR Channel 13′s “Sunrise.”  He spent nearly 15 years waking up Indiana on WRTV Channel 6.

Poteet is an actor on broadcast and corporate voice over and on-camera projects.  He’s a frequent emcee and volunteers often for Indiana charities.  A 2010 fundraising drive conducted entirely on his social networks raised nearly $5,000 in conjunction with Poteet running the New York City Marathon for “Team Tillman,” an organization for military families dedicated to the memory of Pat Tillman, an NFL player who walked away from his career to serve in the Mideast.

Join the Conversation on Wednesday, February 6th at 10:30 a.m.